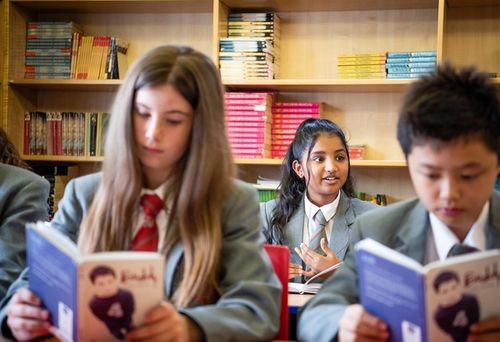 The 400+ school community comprises children from the local area and overseas totalling 25 nationalities. It offers high academic standards and good pastoral support; children are also encouraged to develop their interests outside of the classroom to become well-rounded, academically able, and confident young people.

The 28th edition of Parent Power identifies the 2,000 highest-achieving schools in the UK, ranked by their most recently published examination results. A fully searchable national database by school name, local authority, town and postcode, together with regional rankings are available to Times and Sunday Times subscribers at: thesundaytimes.co.uk/parentpower (http://thesundaytimes.co.uk/parentpower)

As well as an assessment of all academic results on a school-by-school basis, Parent Power enables parents to compare the performance of a given school with other schools in the same town, local authority or nationally. There are also live links to school websites and schools’ most recent inspection reports.

Parent Power is widely acknowledged as the most authoritative survey of the country’s best schools. The rankings in the secondary school league tables are determined by the percentage of examination entries gaining A* to B grades at A-level (which is given double weighting) and the percentage of entries graded 9, 8 and 7, at GCSE and iGCSE.

"Congratulations to Benson Ferrari, Headmaster, for his outstanding leadership, and everyone at St Michael’s School for this achievement. This is well deserved and a testament to the sustained dedication and care staff have shown to every child."

"This is a superb and significant achievement which reflects the hard work of all the staff and pupils in making our school so successful and over a sustained period. We work with the philosophy that all pupils at our school should be enabled to reach their potential, whatever their ability, interests, and future goals. All we ask for is for perseverance, excellent behaviour and self-motivation, which our pupils show us in abundance."

This award follows up on St Michael’s success as Welsh Independent Secondary School of the Year in 2018, acknowledging its consistent academic excellence over the past 10 years.

"Always one of the leading Welsh independent schools, St Michael’s has been on an accelerating upward curve, rising from 229th place in 2014 to 52nd in our latest ranking through five straight years of improving examination results. The 92% of A-level grades at A*, A or B grades in 2019 was astounding."