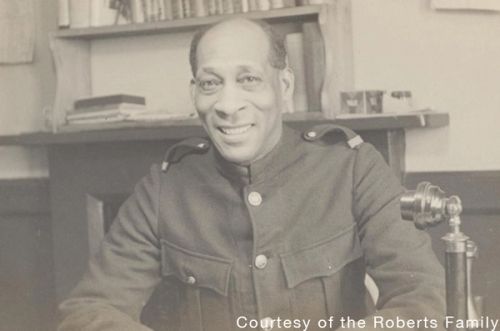 Dr Samantha Harding visited Guildhouse School, London, to talk about George Arthur Roberts, her great-grandfather. Samantha reflected on his life, his achievements, and his legacy.

George (1 August 1890 – 8 January 1970) was a Trinidadian soldier, firefighter, and community leader. He served in the First World War, where he became known as the "coconut bomber" for his extraordinary ability to throw bombs back into enemy lines, like he did with coconuts as a child.

George went on to become a firefighter during the Blitz and the rest of the Second World War.

"I particularly liked the detail about him volunteering for the fire service because he was too old to enlist. That is heroic!"

In 1944 he was awarded the British Empire Medal "for general duties at New Cross Fire Station" and his part as a founder and pioneer of the discussion and education groups of the fire service. Plaques have been erected in his honour in London, at his home and workplace.

The consensus was it was a "fascinating talk," with one student commenting:

"He was an amazing guy and he did so much despite all the discrimination."

The Strange Career of the Statue in Modern American History

Dr Erik Mathisen, from the University of Kent, discussed 'The Strange Career of the Statue in Modern American History' with students and staff at The Worthgate School in Canterbury.

By focusing on the proliferation of confederate memorials in the south of the United States at the time of the Jim Crow laws, Dr Mathisen encouraged students to reflect on the role of statues and collective memories.

"Dr Mathisen made me think back to all the statues I've seen and the message they are trying to convey... Statues hold power over people. It's either an inspiring power or an intimidating one.

"I would like to research more on the statues and their history. I believe it would be quite interesting and exciting knowing the power that carved stone or marble holds over living individuals."