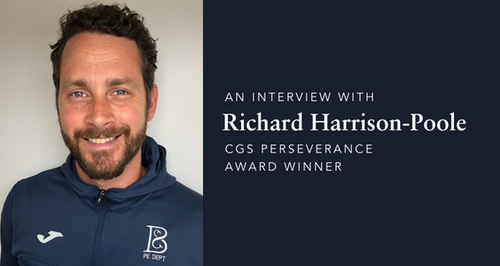 Richard has a degree in Sports Development & Coaching Science and started his career in a school as a Sports Technician before training and qualifying as a PE Teacher. Richard said:

"I enjoyed working in a school setting and knew that a career in teaching is something I would be passionate about!"

He joined BCS in 2008 and became Head of PE in 2010 before becoming Director of Sport, allowing him to lead in setting up Sport Academies to develop excellence in various sports.

Richard says his role is "exciting, fulfilling and ever-evolving," and in his nomination, he was described as "epitomising 'going further than others' (CATS Global Schools strapline). He attends every event and is always the last to leave, helping clear up and stack chairs, and sharing kind words with pupils and staff.

"Richard is well known in the wider community, working closely with so many partners but particularly with Dorset Children's Foundation in raising funds. He is a man who wants to help everyone!"

What's the biggest misconception people have about your position?

That I only teach children to kick balls for a living. My brother actually calls me the chief ball kicker!

What changes have you pioneered?

When I first joined BCS, I was challenged by the then Headmaster to assist local sports teams with coaching, something which I threw myself into. This experience inspired the inception of the Sports Academies. I channelled my energy into developing Academies for boys and girls by forming strong sporting partnerships, including AFC Bournemouth, Bath Rugby, and West Hants Tennis Club. I also wrote athlete development programmes, entered teams into industry competitions, and provided a positive space and experience for pupils to thrive.

Before taking over as the Head of Co-curricular Activities, our co-curricular offering was called Pathways and had minimal uptake. I researched local schools to see how they ran and promoted their co-curricular activities and used my findings to rejuvenate ours. I also used the project as a focus to gain a National Professional Qualification in Senior Leadership. I introduced a variety of new activities, increased the number of weekly sessions and ensured they became a crucial part of our holistic education offering. Some of the most successful new clubs have included Triathlon, Beginner's Cooking, and computer game design and animation, run by a local company, CGApprentice.

What does perseverance mean to you?

Hurdles are made to jump, climb or crawl over – there is always a way. Planning, hard work, drive, and dedication will mean you will always get there in the end.

How do you show perseverance when you're having a bad day?

Teachers are taught to put on that external smile. One thing I always remember is if you positively greet others, you will more than likely receive a positive response. Positivity attracts positivity! The world does not stop spinning; tomorrow is always a new day.

What tips have you got for developing perseverance?

Don't be deterred by any knockbacks. Nine times out of ten, people say no because you still need to fine-tune and develop the plan you have to offer the best outcomes. Be open to constructive criticism and opinions. No one knows everything! Glean as much as you can from other colleagues and people you respect.

Also, always remember you are not alone. I struggle to delegate and let go, and it takes a real effort for me to be able to do this. Trust in your team. Mine are awesome. Let them be awesome!

Who do you most admire that shows true grit and determination?

The children. They are amazing. They work so very hard, and so many have incredible outcomes.

What has been the impact of your perseverance?

From a school with less than 100 pupils engaged with sport to now 600 pupils across Senior and Prep enjoying the benefits of physical activities; 110 of those as members of the Sport Academies - I'm incredibly proud of what we've achieved. There's much more room for growth and development, including more external children joining our Academies. I'm excited to see what the future holds!