Educating for the Future: Part 1 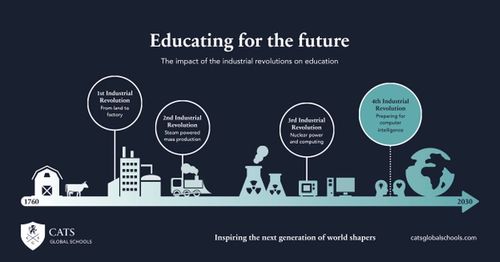 If we teach today’s students how we taught them yesterday, we rob them of tomorrow – John Dewey (1944)

In 2018, the World Economic Forum released a paper entitled “The Future of Jobs” describing how “the Fourth Industrial Revolution is interacting with other socio-economic and demographic factors to create a perfect storm of business change in all industries, resulting in major disruptions to labour markets”.

The young people being educated today by CATS Global Schools will be heading straight into the middle of this revolution. As part of our vision to Inspire the Next Generation of World Shapers, it is important that we focus on how we teach our young people the skills they will need to excel in the future, but also how we can make them active contributors of society to shape tomorrow’s world.

Part 2 of this piece - later in the year - will delve more deeply into the challenges ahead and what is required from our educational approach. Before looking to the future, though, can we learn from the past? This is the Fourth Industrial Revolution, so what were the other three? How did they affect education and young people, what were the driving factors for reform and what can we learn?

Before the first industrial revolution of the mid-1700s to 1800s, most of the workforce was employed in agriculture, learning only through tradition from families and communities, with formal schooling being almost exclusively for the upper classes or via religious Sunday Schools. This period, however, saw the heavy industrialisation and standardisation of processes in factories and the need to develop a more skilled and trained workforce. By the 1830s, education had become an important part of life and the Government made it compulsory for all children working in factories to have at least two hours of education per day, but work was still the priority.

By the late 1800s, the second revolution saw the introduction of amazing industry marvels such as the steam engine and the telephone, further standardisation of processes, and the need for less ‘manual’ labour and more engineers and scientists. By 1880, education became compulsory for children under 10, but the next 50 years very much reflected the economic needs of the workforce. With much of the funding being provided by the industrialists, schools were (and to some extent remain) reflective of the factory environment - with learning through repetitive action and bells indicating the start and end time of tasks. Students were certainly not encouraged to think for themselves, and punishment for not conforming was often harsh.

“The current approach to education reflects its roots in the industrial revolution, the system and the schools within it are designed like a manufacturing process, to take inputs and produce an output but our current outputs are those needed for a bygone era.”

Towards the end of the Second World War, major reforms saw the introduction of a three-tier system of Grammar, Secondary Modern and Technical schools. The theory was to train students to undertake relevant jobs to their appropriate style of education. This was again a reflection of the socio-economic needs of the time. This included the need for an expanded workforce for post-war rebuilding and the expansion of work that was deemed to be more suitable for women to undertake such as teachers and office workers.

The third industrial revolution happened across the 1970s, 80 and 90s with the scientific advances in nuclear power, electronics and computers. Workers needed a higher level of skill and a greater ability to think more deeply around problems. Economic superiority became demonstrated by knowledge and technology rather than manufacturing and steel and sweeping education reforms were again introduced in the early 1990s to prepare the country for life in the 21st century. Schools in most parts of the country were standardised and the three-tier system was abolished. GCSE and A level exams were introduced to ensure students were meeting common standards of knowledge, literacy and numeracy.

Many critics continue to argue that this last adjustment narrowed the ability of students to adapt and think for themselves by focusing on a single set of subjects. Over time, as schools became used to the requirements, many simply ‘taught to the test’ to be able to obtain the necessary results. In fact, many education methods may not have progressed far from the factory-like processes of the early 20th century.

"In the last few generations our relationship with information knowledge has completely changed. Education and, to be frank educators, have failed to keep up."

This debate is not a new one, though, with the Brazilian Educationalist Paulo Freire writing as far back as 1970 stating that “dialogue, co-operation and critical thinking” were the most important skills for young people. The lead quote from John Dewey even reflected this point over 80 years ago, but now, with the fourth industrial revolution, we believe it is time to forge ahead with a new way of thinking for tomorrow’s world.

“At some point, the future of education will involve a change to assessing students against the skills they will need in the future and in the ways that they will have to use those skills in life. The pandemic has seen CATS University Foundation Programme (UFP) smoothly move to fully electronic assessment, within a year, so I know that rapid, positive, progress in assessment is possible when there is a will to make it happen.”

Reflect for a moment what life would be like for young people in the future. Facts and knowledge are immediately at hand with a simple ‘Google’. As recently as the 1980s, electronic calculators revolutionised maths, but now, chips in your glasses can undertake complex queries in microseconds. At CATS Global Schools, we think about the needs for society in the future and, most importantly, what will ensure our young people stand out and contribute to tomorrow’s world.

As great as computers are, the one thing they have not mastered yet is humanity. The skills and behaviours that make us different and that many have been arguing we should be cultivating for over a century. From empathy and self-knowledge to curiosity and cognitive flexibility, by inspiring our students to become the next generation of world shapers, they can embrace the fourth industrial revolution with both hands.

“The narrow past approach of learning by rote has delayed our progress. Learners today need to be resilient, naturally inquisitive, adaptable and emotionally intelligent. Future learning will focus more on technology and creation of apps. Developing interpersonal skills that no robot can reproduce will become more important than learning pure facts.”

In this first section, we have taken a brief look at how the first three industrial revolutions have shaped approaches to education and the skills required from the students of the day. In part 2, we will delve deeper into the fourth revolution itself, one of deep technological change, to discover the things we need to be doing to help our young people Go Further than Others.